Kyrgyzstan is an amazing and unique in its beauty country. This small oasis in the Heart of Central Asia impresses with its huge variety of landscapes and a considerable role in it is played by unique Issyk Kul Lake. Often Kyrgyzstan is named "Asian Switzerland", however virgin mountains and richest nature of Kyrgyzstan are far excel in the cleanness of the beaten European Alps. Culture and historical heritage of Kyrgyz people are also very interesting. Until now, the country retains all the attributes of nomadic life. Only in Kyrgyzstan in summer period you will see yurts- nomadic portable dwellings decorated with felt carpets, meet nomads, who will welcome you and probably invite to their yurt to try traditional Kyrgyz drink kymyz.

Arrival in Bishkek early in the morning. Upon arrival at the International Airport Manas you will be met by our tourist guide at arrival gates. Transfer to the city will take 30-40 min. Hotel check in (early check in is included into the tour cost).

After a restful morning and breakfast at the hotel we drive around 40 km out of Bishkek to Ala Archa National Park. It is popular place for picnics, hikes, rock climbing and alpinism. There are 20 glaciers in the territory of the park. The total area of the park is 200 km2. You can go for a walk on the paved road along the river or hike up to the mountains to get a spectacular view of the gorge. If you are in a reasonable state of health you can hike up to the waterfall (3.75 km- 2.5-3 hours one way)
Heading back to Bishkek. Lunch at a local cafe.
After lunch we head out on a sightseeing tour of Bishkek, which includes: the Monument of Kyrgyz National hero Manas, Changing of Guards of Honor, Kurmanjan Datka Monument.
A sightseeing tour of Bishkek comes to an end at Victory Square. After excursion we will go to ZUM (Central department store) to buy souvenirs.
Dinner at a local restaurant.
(Breakfast – hotel, lunch – local cafe, dinner – local restaurant)

Breakfast at the hotel.
Today we will have a long drive to Son Kul Lake, so we leave early in the morning. The road to the lake lies through Boom gorge; Orto Tokoi Reservoir and dramatic Kalmak Ashuu pass (3445 m).
Lunch at a local Kyrgyz family in Kochkor village.

Alpine Son Kul Lake is located on Tien Shan range at the elevation of 3016 m. The territory around Son Kul is a pasture for the cattle driven from Kochkor village, Naryn and Jumgal regions. During the summer Son Kul pasture is considered to be the best Kyrgyz jailoo. The road to the lake goes through the windy mountain passes and vanishes in the sky. As a result Son Kul Lake t from Kyrgyz language ranslates as “Last Lake”.

Arrival at Son Kul Yurt Camp. Accommodation in yurts 3-4 pax. Here you can feel like a real nomads and get acquainted with the culture of Kyrgyz people.

Yurt – is a traditional dwelling of nomadic people of Central Asia. The foundation of yurt consists of wooden carcass and several felt layers.
The construction of such dwelling doesn’t require a lot of time that makes it practical and useful for locals.
The interior of a yurt is decorated with felt carpets and traditional embroidery.
Dinner and overnight at yurt camp.
(Breakfast – hotel, lunch – local Kyrgyz family, Dinner – yurt camp)

Breakfast at yurt camp.
After breakfast departure from Son Kul Lake to Tash Rabat Caravanserai via Kalmak Ashuu pass (3665 m) that brings you to great scenery of Tien Shan Mountains and serpentine road. The road takes you down to Naryn town.
You will make a stop for lunch in Naryn town.

Naryn is a town of long and narrow form, situated along the famous Naryn River also named Syr Darya, which is one of the biggest rivers in Kyrgyzstan and Central Asia. Naryn is the only town in Kyrgyzstan, where 90 % of the population is Kyrgyz.

Upon arrival in Kara Koyun gorge accommodation at the yurt camp (4-6 people in one yurt)
Free time for a walk.
The excursion to Tash Rabat Caravanserai can be accomplished in the morning next day, when a sun will light it up with the rays.

Tash Rabat caravanserai is situated at the elevation of 3200 m asl. not far from Chinese border (Torugart). Its origin is a complete mystery; however there is a hypothesis that it was built in 10th century. Researchers consider it to be a Nestorian monastery, others suppose it to be a victualing-house for the trade caravans, and third ones insist on its defensive function. It is obviously clear that during the various epochs Tash Rabat caravanserai had different functions.

Breakfast at the yurt camp.
After the breakfast departure to Kochkor village via Naryn town and Dolon pass (3000m)
Lunch at a local café in Naryn town.

After lunch you will visit the Central Blue Mosque, the Central Square, and Historical-ethnographical museum.
After excursion continue your way to Kochkor village.

In Kochkor village you will visit a local women cooperative, who produce the felt and felt carpets (shyrdak)
Shyrdak is a traditional carpet used by nomads to cover the floor. The technology of carpet making is included into UNESCO list of World Heritage. It is a hard labor that has a lot of subtleties (color choice, decorative patterns, and production techniques)
Those who are interested in will be able to try themselves in ancient handicraft (for additional payment)
Dinner and overnight at a local family.
(Breakfast – yurt camp, Lunch- local café, Dinner – local family)

Breakfast at a local family.
After the breakfast you head the southern shore of Issyk Kul Lake towards Karakol town.

Karakol – is a small but very interesting town with traditional Russian architecture. It was established in the middle of 19th century and became an important garrison settlement in the territory of Issyk Kul region.

Issyk Kul Lake has a tectonic origin. It is a second largest alpine lake in the world after Titicaca located in South America. Its length reaches 182 km, and width is 58 km, maximum depth is up to 668 m. During the summer period the water reaches up to 20-25 Co
On the way you admire beautiful landscape and changing of scenery.
You will make a stop at one of the most beautiful places for a short walk. The place is Fairy Tale Canyon (Skazka). The canyon looks scenic with the dark blue Issyk Kul Lake on the background.

After a walk we continue our way to Tamga village.
Lunch at a local family.
After lunch you will head to Djety Oguz gorge.

Djety Oguz from Kyrgyz language is translated as Seven Bulls. Unlike Fairy Tale Canyon this picturesque gorge differs in the mountains covered with Tien Shan fir tree. At the beginning of the gorge you will face a famous Broken Heart Rock. Walking up further to panorama you will see those famous Seven Bulls rocks. The tourist guide will tell you the legend about the origin of the gorge name. In Soviets, there was a sanatorium built in the gorge. Many people used to come here for treatment with the help of radon water. Cosmonauts used to come here for rehabilitation, even Yuri Gagarin.

Breakfast at the hotel.
After breakfast you will visit Dungan mosque a unique building in a style of the Chinese pagoda which is functioning mosque up to now.
Also you will visit Russian Orthodox Holy Trinity Church built of wood without a single nail used. In the miraculous iconostasis of the church there is the famous Tikhvinian icon of Divine Mother, painted in 1897.

After Karakol sightseeing you head to Memorial Museum of N.M.Przhevalsky a great Russian explorer and researcher of Asian continent, which 12 km far from Karakol. Drive to Cholpon Ata town.
Lunch at a local café.

After lunch visit the Open air Petroglyphs Museum. Petroglyphs are dated back Sak-Usun period from 9-8 century up to 3-5 century AD. The territory where Petroglyphs are found lying below the Kungey Alatoo Mountains with a beautiful view of the lake.

Breakfast at the hotel.
After the breakfast we will take another beautiful drive on to Bishkek city. En route you will visit Architectural- Archeological Complex “Burana Tower” (UNESCO)

Burana Tower (ancient minaret) is located in 12 km far from Tokmok town. The territory where the tower is located was called Balasagyn town. This town had the strategic meaning for Great Silk Road. Here you will see a small museum with exhibits found at excavations, providing more details about this ancient settlement, and become familiar with collection of Balbals, turkic grave marks.

Lunch at a local Kazakh family in Tokmok.
Arrival in Bishkek, check in.
Optionally: You can take a wander around Osh bazaar (closed on Monday)

Farewell dinner and folklore show at a local restaurant.

Especially for you musicians will play national melodies of Kyrgyz people and show you musical instruments. You will listen to a singing and enjoy the charming melodies of our ancestors.
Overnight at a hotel.
(Breakfast – hotel, lunch – local Kazakh family, D- local restaurant)

The price doesn’t include: 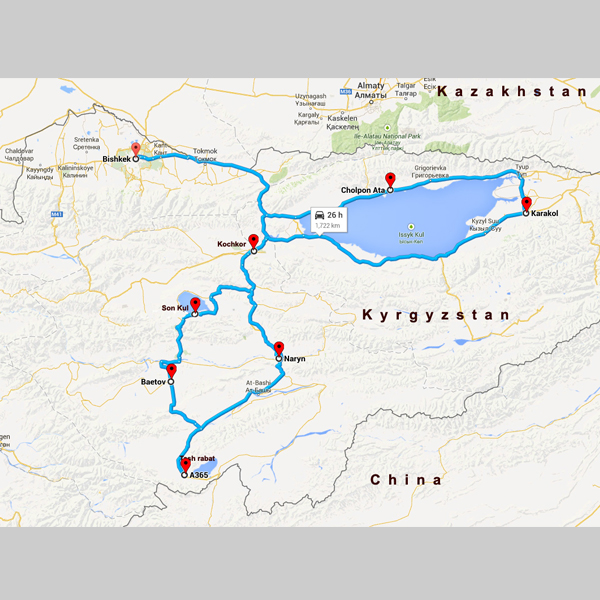 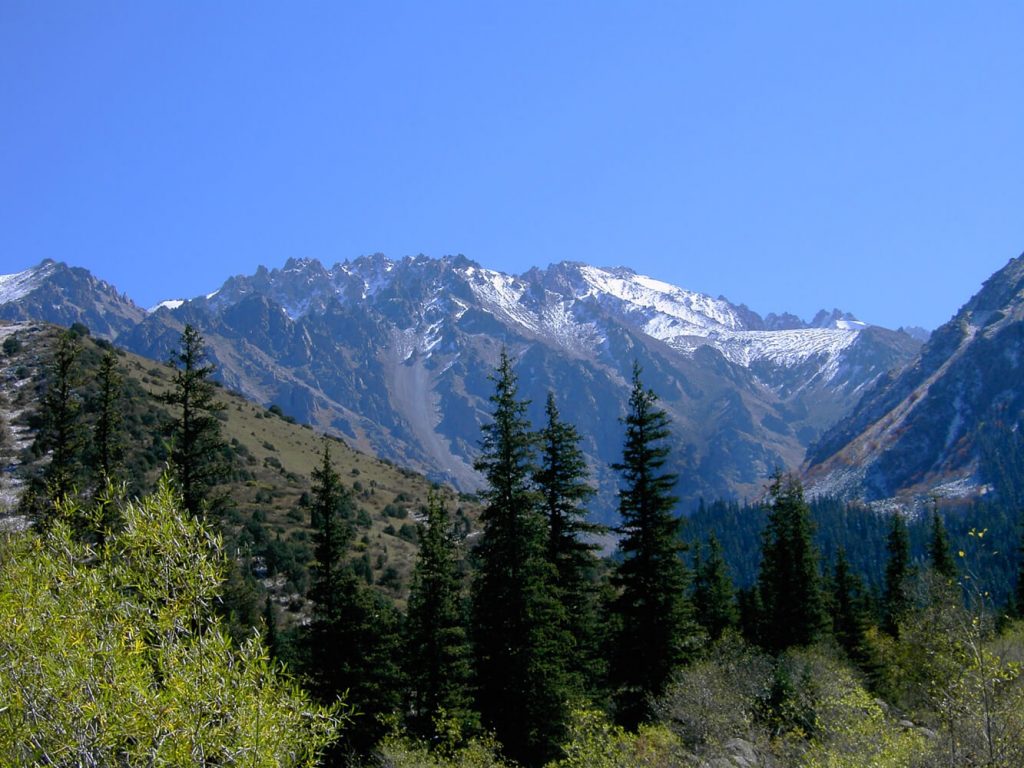 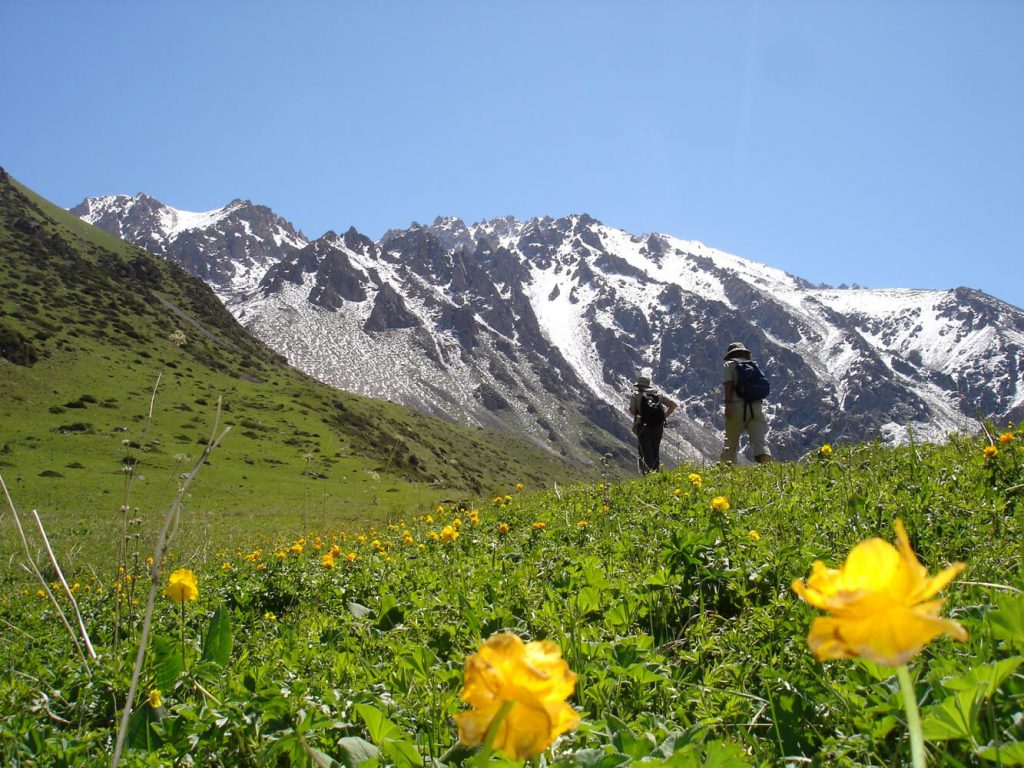 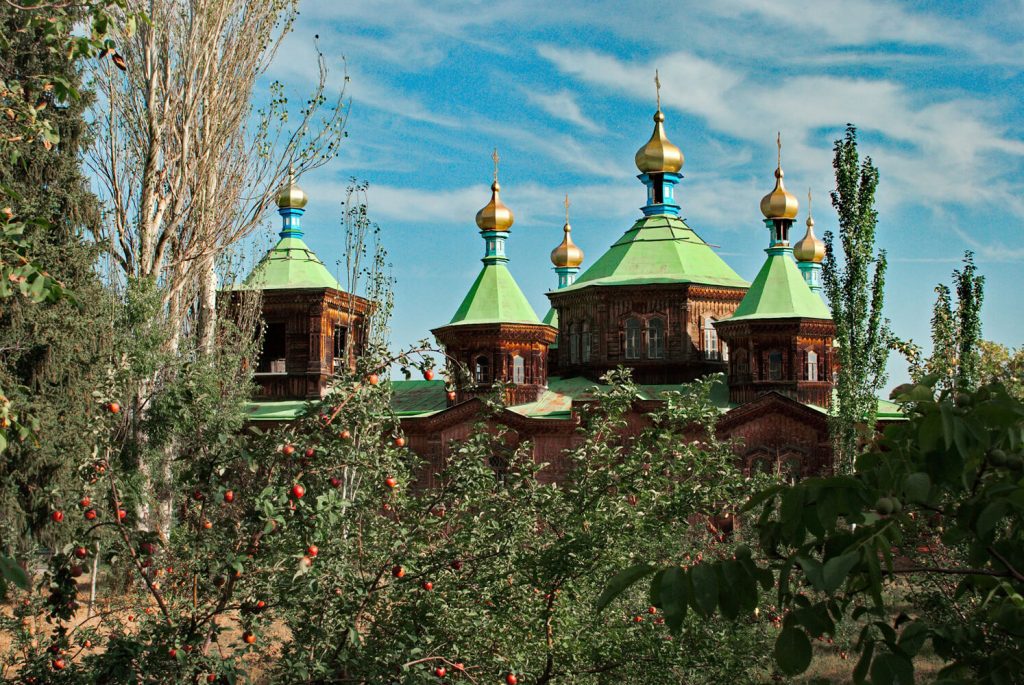 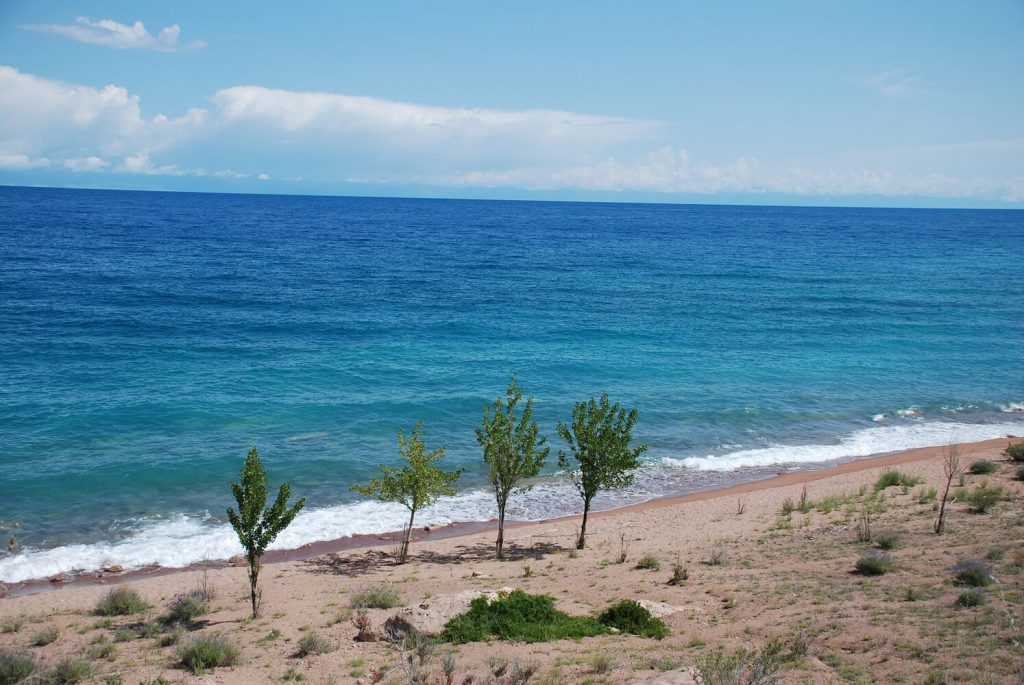 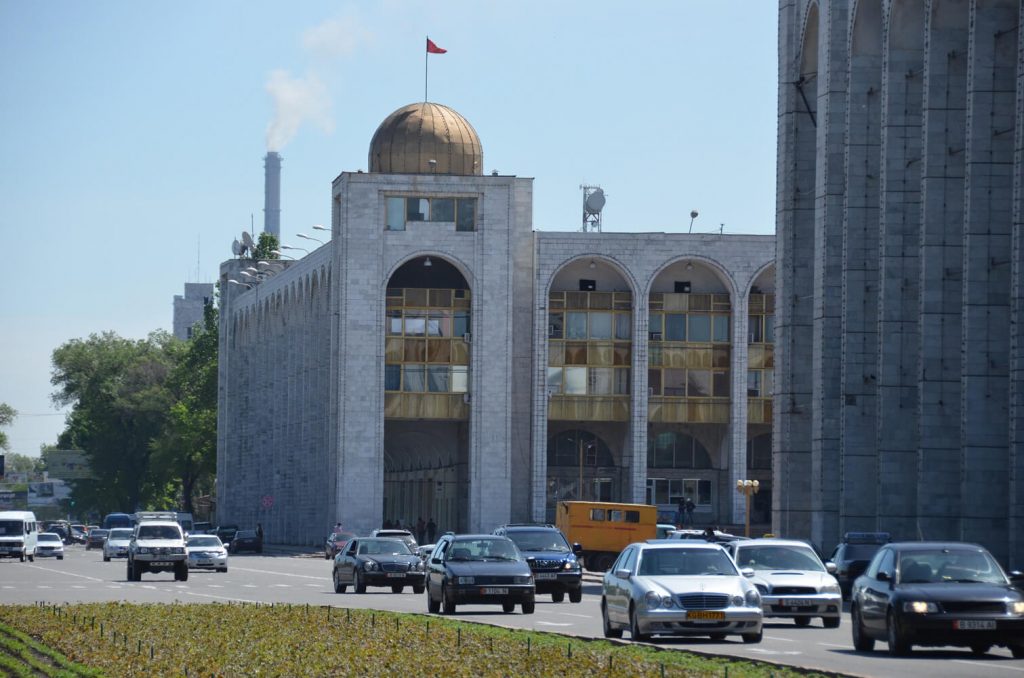 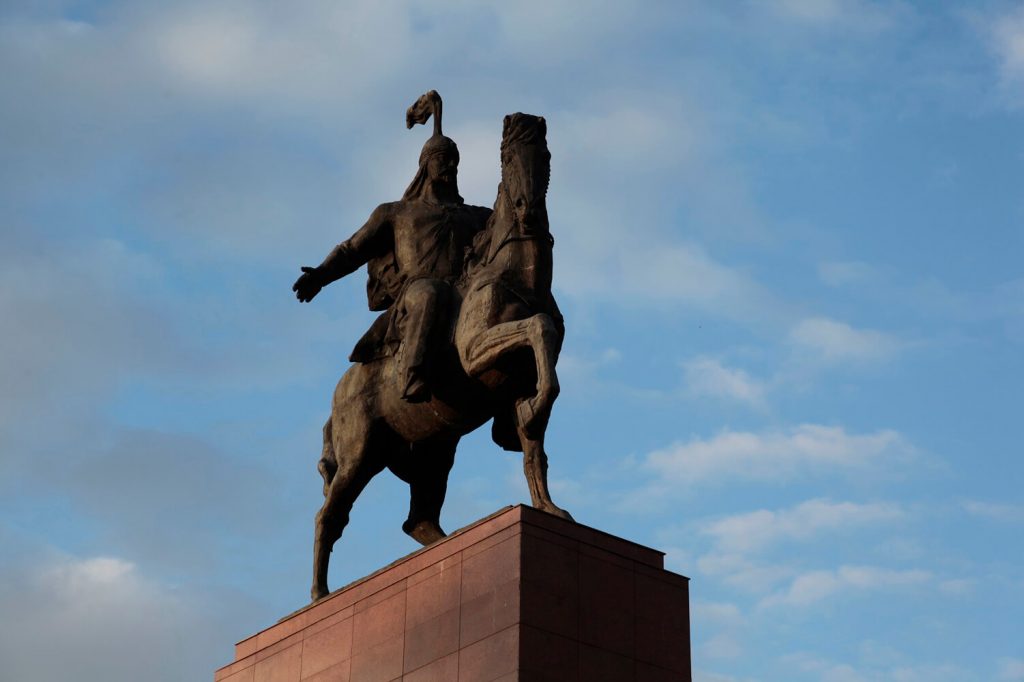 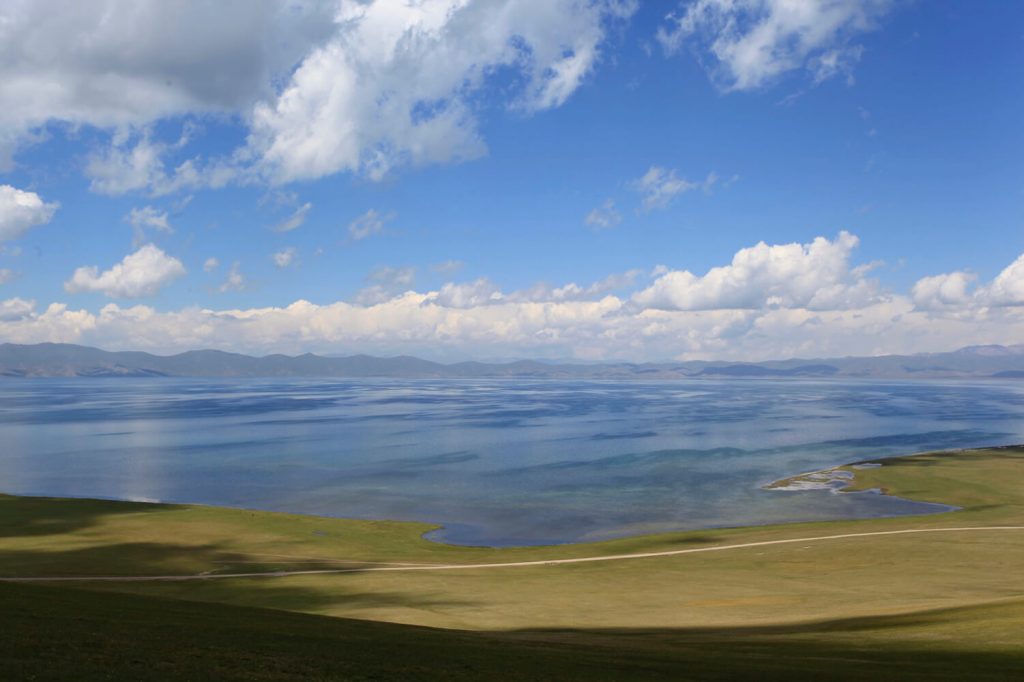