Uzbekistan, History
In the first millennium BC, Iranian nomads established irrigation systems along the rivers of Central Asia and built towns at Bukhara and Samarqand. These places became extremely wealthy points of transit on what became known as the Silk Road between China and Europe. In the seventh century AD, the Soghdian Iranians, who profited most visibly from this trade, saw their province of Transoxiana (Mawarannahr) overwhelmed by Arabs, who spread Islam throughout the region. Under the Arab Abbasid Caliphate, the eighth and ninth centuries were a golden age of learning and culture in Transoxiana. As Turks began entering the region from the north, they established new states, many of which were Persianate in nature. After a succession of states dominated the region, in the twelfth century, Transoxiana was united in a single state with Iran and the region of Khwarezm, south of the Aral Sea. In the early thirteenth century, that state was invaded by Mongols, led by Genghis Khan. Under his successors, Iranian-speaking communities were displaced from some parts of Central Asia. Under Timur (Tamerlane), Transoxiana began its last cultural flowering, centered in Samarqand. After Timur the state began to split, and by 1510 Uzbek tribes had conquered all of Central Asia.
In the sixteenth century, the Uzbeks established two strong rival khanates, Bukhoro and Khorazm. In this period, the Silk Road cities began to decline as ocean trade flourished. The khanates were isolated by wars with Iran and weakened by attacks from northern nomads. Between 1729 and 1741 all the Khanates were made into vassals by Nader Shah of Persia. In the early nineteenth century, three Uzbek khanates—Bukhoro, Khiva, and Quqon (Kokand)—had a brief period of recovery. However, in the mid-nineteenth century Russia, attracted to the region’s commercial potential and especially to its cotton, began the full military conquest of Central Asia. By 1876 Russia had incorporated all three khanates (hence all of present-day Uzbekistan) into its empire, granting the khanates limited autonomy. In the second half of the nineteenth century, the Russian population of Uzbekistan grew and some industrialization occurred.
At the beginning of the twentieth century, the Jadidist movement of educated Central Asians, centered in present-day Uzbekistan, began to advocate overthrowing Russian rule. In 1916 violent opposition broke out in Uzbekistan and elsewhere, in response to the conscription of Central Asians into the Russian army fighting World War I. When the tsar was overthrown in 1917, Jadidists established a short-lived autonomous state at Quqon. After the Bolshevik Party gained power in Moscow, the Jadidists split between supporters of Russian communism and supporters of a widespread uprising that became known as the Basmachi Rebellion. As that revolt was being crushed in the early 1920s, local communist leaders such as Faizulla Khojayev gained power in Uzbekistan. In 1924 the Soviet Union established the Uzbek Soviet Socialist Republic, which included present-day Tajikistan and Uzbekistan. Tajikistan became the separate Tajik Soviet Socialist Republic in 1929. In the late 1920s and early 1930s, large-scale agricultural collectivization resulted in widespread famine in Central Asia. In the late 1930s, Khojayev and the entire leadership of the Uzbek Republic were purged and executed by Soviet leader Joseph V. Stalin (in power 1927–53) and replaced by Russian officials. The Russification of political and economic life in Uzbekistan that began in the 1930s continued through the 1970s. During World War II, Stalin exiled entire national groups from the Caucasus and the Crimea to Uzbekistan to prevent « subversive » activity against the war effort.

Moscow’s control over Uzbekistan weakened in the 1970s as Uzbek party leader Sharaf Rashidov brought many cronies and relatives into positions of power. In the mid-1980s, Moscow attempted to regain control by again purging the entire Uzbek party leadership. However, this move increased Uzbek nationalism, which had long resented Soviet policies such as the imposition of cotton monoculture and the suppression of Islamic traditions. In the late 1980s, the liberalized atmosphere of the Soviet Union under Mikhail S. Gorbachev (in power 1985–91) fostered political opposition groups and open (albeit limited) opposition to Soviet policy in Uzbekistan. In 1989 a series of violent ethnic clashes involving Uzbeks brought the appointment of ethnic Uzbek outsider Islam Karimov as Communist Party chief. When the Supreme Soviet of Uzbekistan reluctantly approved independence from the Soviet Union in 1991, Karimov became president of the Republic of Uzbekistan.

In 1992 Uzbekistan adopted a new constitution, but the main opposition party, Birlik, was banned, and a pattern of media suppression began. In 1995 a national referendum extended Karimov’s term of office from 1997 to 2000. A series of violent incidents in eastern Uzbekistan in 1998 and 1999 intensified government activity against Islamic extremist groups, other forms of opposition, and minorities. In 2000 Karimov was reelected overwhelmingly in an election whose procedures received international criticism. Later that year, Uzbekistan began laying mines along the Tajikistan border, creating a serious new regional issue and intensifying Uzbekistan’s image as a regional hegemon. In the early 2000s, tensions also developed with neighboring states Kyrgyzstan and Turkmenistan. In the mid-2000s, a mutual defense treaty substantially enhanced relations between Russia and Uzbekistan. Tension with Kyrgyzstan increased in 2006 when Uzbekistan demanded extradition of hundreds of refugees who had fled from Andijon into Kyrgyzstan after the riots. A series of border incidents also inflamed tensions with neighboring Tajikistan. In 2006 Karimov continued arbitrary dismissals and shifts of subordinates in the government, including one deputy prime minister. 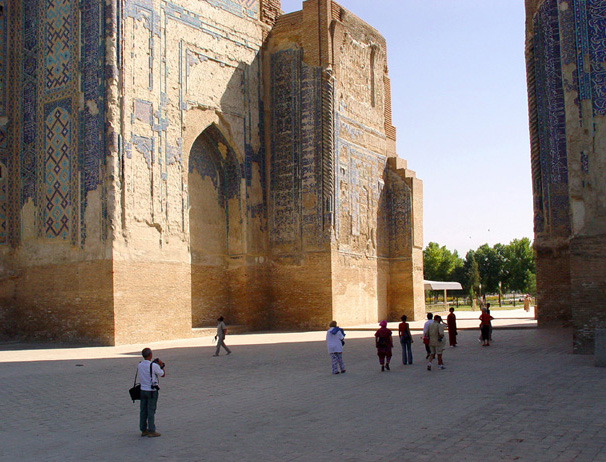