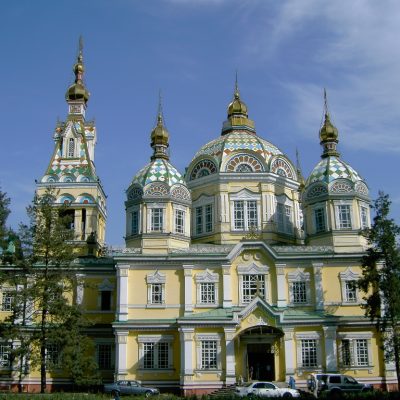 Almaty
Almaty, also known by its former names Verny (Russian: „Faithful,“ prior to 1921) and Alma- Ata (between 1921 and 1992), is the former capital of Kazakhstan and the nation’s largest city, with a population of 1 806 833 (as of January 1, 2018). This represents approximately 9% of the population of the country.
It is already more than 15 years since the capital has been moved from mild and soft climate of North Tian-Shan into the cold and windy prairie of Central Kazakhstan. In spite of everything, Almaty is still the biggest city in the country and is its main commercial, financial, scientific and educational center.

Aisha Bibi mausoleum
Aisha Bibi Mausoleum: the Aisha-Bibi is an 11th or 12th-century mausoleum for a noble woman located in the village of Aisha Bibi, 18 km west of Taraz, Kazakhstan on the Silk Road. It is locally famous as a monument to love and faithfulness.

Khoja Akhmed Yassawi
Khoja Akhmed Yassawi (born in Sayram in 1093, and died in 1166 in Hazrat-e Turkestan, both cities now in Kazakhstan), was a Turkic poetand Sufi (Muslim mystic), an early mystic who exerted a powerful influence on the development of mystical orders throughout the Turkic-speaking world. Yasavi is currently the earliest known Turkic poet who composed poetry in a Turkic dialect.
Yassawi made considerable efforts to spread Islam throughout Central Asia and had numerous students in the region. Yasawi’s poems created a new genre of religious folk poetry in Central Asian Turkic literature and influenced many religious poets. Yassawi made the city of Yasi into the major centre of learning for the Kazakh steppes, then retired to a life of contemplation aged 63. He dug himself an underground cell where he spent the rest of his life. Turkish scholar Hasan Basri Çantay noted that „It was a Seljuk king who brought Rumi, the great Sufi poet, to Konya; and it was in Seljuq times that Ahmad Yesevi, another great Sufi, lived and taught. The influence of those two remarkable teachers has continued to the present.“
A mausoleum was later built on the site of his grave by Tamerlane the Great in the city (today called Turkistan).

Otrar
Otrar was first excavated in 1969. Remains were found of some brick structures, including a palace, mosque, a bathhouse and ovens. Otraror Utrar (also called Farab) is a Central Asian ghost town that was a city located along the Silk Road near the current town of Karatau in Kazakhstan. Otrar was an important town in the history of Central Asia, situated on the borders of settled and agricultural civilizations. It was the center of a great oasis and political district, commanding a key point connecting Kazakhstan with China, Europe, Near and Middle East, Siberia and Ural. 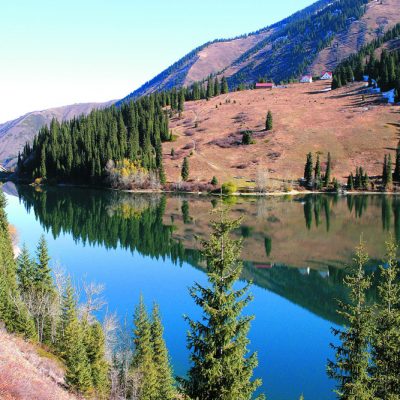 Kolsay lakes
Kolsai lakes are mountain lakes in the Northern Tien Shan. They are located down along the gorge of the Kolsai River in a peculiar cascade. The most available is the Lower Lake: a good dirt road comes to it.
The lakeis located at an altitude of 1818 m, has a length of 1450 meters, a width of 400 meters and a depth of 80 m. It was formed as a result of the manifestation of seismic activity. A huge collapse from the western ridge formed a grand dam. Repeatedly the waters of the reservoir broke it, as a result of which a deep canyon formed below the lake. The landscape around the lake is very picturesque. All the slopes were densely covered with the famous Schrenk spruce, which grows only in this part of the planet. Rainbow trout lives in a pond. The lake in all seasons and at different times of the day is beautiful in its own way. Especially the lake is adorable in autumn, when the deciduous plants bloom with all the colors of the rainbow on the background of evergreen spruce trees.
The Second or Middle Lake is located higher along the gorge, at six and a half kilometers, at an altitude of 2,250 meters. The lake also formed as a result of a powerful earthquake and the collapse of the eastern slope. The lake has a length of one kilometer and a width of up to 550 meters and also a considerable depth. The western and northern slopes are covered with a thick spruce forest. The eastern slopes are alpine meadows with sparse islets of spruce forest. In the lake also lives rainbow trout.
The upper lake is located at a distance of four kilometers from the Middle Lake, at an altitude of 2,680 meters. After the retreat and melting of the ancient glacier, in which the lake was formed. An ancient moraine serves as a natural dam. The lake has a wrong form and smaller dimensions: 450 meters in length and 330 meters in width, the depth is unknown. The lake is located on the border of two zones – forest and alpine meadows. The forest here is not so thick as below, and immediately after the lake high-mountain meadows begin. The lake is absolutely lifeless and very cold.

Big Almaty lake
Now this lake is known as Big Almaty, or BAO, called so not because of its size, but by the name of the gorge. In old times, bears the name Zhosalykol, i.e. “Ocherous”, because of the reddish color of the rocks Baby peak, bathing its slopes in its waters.
The lake is located at an altitude of 2511 meters. The Big Almaty Lake, together with the Issyk (1756 m), are the largest mountain lakes in the Zajlijskiy Alatau, only the BAO is located at a higher altitude.
The proposed reasons for the formation of the lake are two. The first of them is tectonic. About 2000 years ago there was a powerful earthquake, and a huge collapse blocked the gorge, creating a big natural dam, behind which a beautiful blue lake was formed. Affects the size of the dam – the height from the base to the upper ridge is 500 m, and the length along the river bed is 2.5 km.
The second reason is the activity of the ancient glacier. The glacier moved, pushing a huge mass of stones in front of it, forming a moraine. Grinded and deepened the hollow, then retreated, leaving the dam and the lake.
The water of the lake is of high quality and is used for water supply in Almaty. In 1962 a cascade of hydroelectric power stations was built on the lake. The natural dam was raised by 10 meters and reinforced from the side of the lake with concrete slabs, equipped with a bottom outlet and an automatic spillway. At an average level of filling the lake reaches 1.5 km in length, up to 700 m in width.

The lake has an amazing game of water color: during the day it changes from azure and turquoise to a deep ultramarine. The lake is surrounded by the majestic peaks of the Trans-Ili Alatau, forming a kind of crown.
In the locality of the lake there are several objects, which have a big scientific importance. On the dam there are a Special Solar Observatory and Kazhydromet station. A little above the lake is the Tien-Shan High-altitude Expedition of the State Astrophysical Institute, founded in 1957. Shternberg of the Moscow State University, which is now called – High-altitude Almaty station GAISH. There is also a frontier post, guarding the state border, passing along the ridge of the Trans-Ili Alatau.
To the west of the lake there is a serpentine road, which ends at the pass Zhosalykezen (3336m). There is another Tien Shan Scientific High-altitude station, which studies cosmic radiation, better known as Cosmostation.
Immediately there is another attraction, well visible from Alma-Ata. Great Almaty peak. The proud name is a toponymic incident associated with the name of the gorge, the height of the summit is only 3681 meters. But it is this mountain, which looks like the right pyramid from the side of the city, gives a unique color to the urban landscape

Singing dunes
The wonderful phenomenon of nature is the Akkum-Kalkan sands, which was called “The Singing Barchan”. Sands, which in dry and windy weather sound like a highly flying jet plane. The power of sound is such that it spreads over many kilometers in the district. “Singing barkhan” is located in the natural park “Altyn Emel”, between the two ridges Kysty – Kalkan and Ulken – Kalkan.

Barhan was formed as a result of blowing sand from the banks of the Ili River. A strong wind blows in this unit of the Ili river valley (between the Kalkans and the Boguty and Sogety mountains), which raises clouds of sand dust from the river banks. At the Big and Small Kalkans, standing at a slight angle to each other, the wind meets barrier and, wanes and leaves sand. For many millennium rose sand mountain 150 meters high, 3 km long in the depth of the Ili Valley. The barkhan stays fixed for several millennium, in despite of fluctuation of sand and strong winds.

In strong winds, the barkhan begins to sound. The sound can be caused by quickly escaping or slipping in dry weather from the top of the barkhan. From the barkhan opens up a beautiful view of the surrounding locality. In the south you can see the glittering ribbon of the Ili River. On the horizon, in the haze, you can see the violet mountains of Sogety and Boguty. In the east and west, like the gates of a huge fortress, rise the Ulken-Kalkan and Kysty-Kalkan mountains. In the north, beyond the vast plain, there are a ridge of spurs of the Dzhungar Alatau, Mount Matai and Altyn-Emel.

Aktau mountains
The mountains of Aktau (in translation means “white mountains”) – this is another amazing nature corner of our country. This place is also called- geological museum under the open sky.

The mountains are located on the territory of the National Natural Park “Altyn Emel”. More than 60 million years ago the sea was splashing here. Frequent rains and mudflows washed the ground of surrounding mountains into it. Here it was deposited on the bottom with red, white, yellow clays. The thickness of the marine sediments exceeds 1800 m, the water washed in them hollows and deep gorges, and the wind helped the water transform the landscape. These lifeless slopes are fancifully rugged by erosion, so unusual that it is impossible to tear eyes. Landscapes change constantly – narrow gorges, bastions, towers, impregnable castles, there is no end to them.

Wild and unusual mountains. This is a special world that is different. Sometimes the landscape seems so unrealistic that you unintentionally fall out of modern times. These mountains existed millions of years ago, our ancestors saw them like that, so we see them.
The plant world is very diverse, although there is practically no fertile soil. Only sand, pebbles and pressed clay. The animal world of these mountains is amazing and rich.