The Somoni Peak (Ex-Communism) (7495 m) is the highest peak of Pamir and the former USSR. It is situated in Tajikistan, on the joint of the ridges of the Academy of Sciences and Peter the Great.

Description of the ascent to the peak of Somoni (Ex-Communism, 7495m).
From the Base Camp on Moskvina Glade (4360m), the route goes along a clearly visible path along the moraine of the Walter Glacier, which intersects in the area of the Helipad. Having crossed the glacier, move towards a wide gently sloping snow shelf, which leads directly to Borodkin's rib. The middle and upper part of the shelf, which is also called the Snow Pillow, is shot through by ice falls, therefore it is recommended to go through this part of the route early in the morning and as soon as possible.
At the exit to the rib, a small rocky section is overcome, usually hung by railings. Camp 1 can be installed at an altitude of 5100m. Then climb the average slope to the snowy slope on the "Chest" (6300m) (the possibility of avalanches here), then the descent and installation of camp 2 (6100m) on the Pamir Firnovy Plateau.
After spending the night under the "Breasts" the next day, cross the plateau, and along the gentle snowy slopes of Dushanbe Peak, begin the ascent to the jumper between Dushanbe Peak and the peak mass of Somoni Peak (Communism). An assault of camp 3 (6900 m) is usually located here. In addition, intermediate camps can be set at altitudes from 6400m to 6600m.
From Camp 3, cross the lintel and go under the steep snow-ice slope "Shovels", along which climb 400 m to a sharp summit ridge, along which you reach the summit (7495 m).
The descent usually takes two days.

Evgenia Korzhenevskaya Peak (7105 m) is one of the seven thousandths of the former USSR, located in the northern part of the Academy of Sciences ridge in 13 kilometres from the Communism peak.

Description of the ascent route to the peak of Korzhenevskaya (7105 m).
From Moskvina glade (4360 m), the Moskvin glacier passes along the marked path, then a small descent into a kind of canyon, movement along the trail bypassing the base of the southern spur.
Further rise to overnight stays 5100 m: the last segment of this section is a rather steep, scree slope.
Camp 1 (5100 m) is located on a rocky slope, there are many places for sites. From BL 6-8 hours. A little higher, after a fairly steep ice take-off, another good overnight stay is 5300m.
Immediately after this, the snow zone begins. After a snow take-off, traverse to the right. The condition of this site varies from year to year: a large number of cracks. After a snow field, a technically difficult section begins - the ice wall. One should be careful of crazy stones.
Camp 2 (5800 m) is located at the base of the southwestern wall, in a kind of "pocket" under the overhanging wall, protecting from stones, on a snow pillow. The width of the shelf suitable for walking is about 3-4 meters. Up to 10 tents can be accommodated. Comfortable and safe nights.
The next section is a long traverse to the right, in the snow under the rocks. Danger are stones and avalanches. The traverse ends with a climb with access to a small snowy saddle at the base of the southern summit ridge. Here are 6100 nights, there are very few places to set tent (a couple of tents maximum). From the camp 5300 m - 5 hours climb.
The 6100 m-6400 m section is steep, with rocks, ice and snow. Usually there is a railing, it takes averagely an hour to pass through. Accommodations at 6400 m (camp 3) are more comfortable than the previous ones: a snow field (a wide part of the ridge) makes it possible to install a large number of tents. From here they you to storm the peaks, from here it is clearly visible.
The last section is a kind of “camel humps”: a series of ups and downs, but with a total climb of about 700 m. There are no particular technical difficulties, but caution should be exercised on the ridge and on steep snowy take-offs.
The rock tower is bypassed on the right, and in the snow there is an exit to the summit (7105 m), which is a snow platform.
Climbing from the assault camp takes 5-6 hours, going down to 6400 m, climbers usually spend the night here, and the next day they go down to the BC. 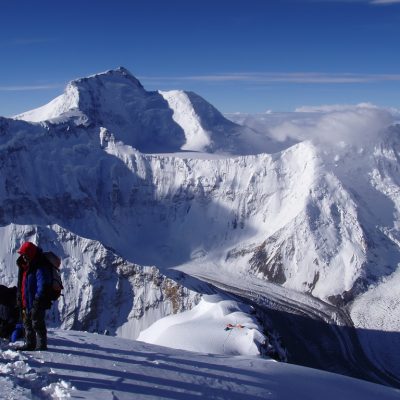 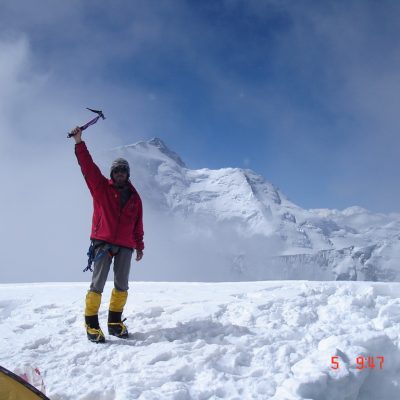 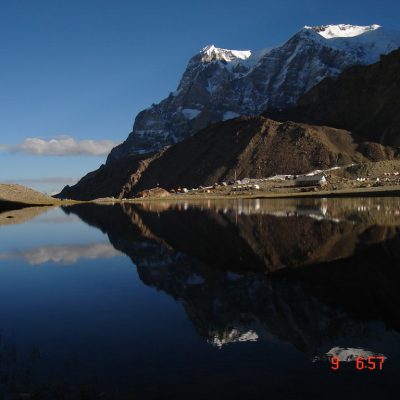 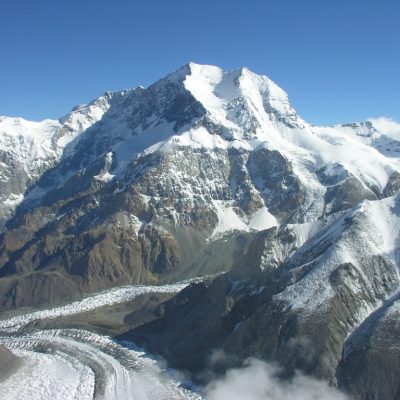 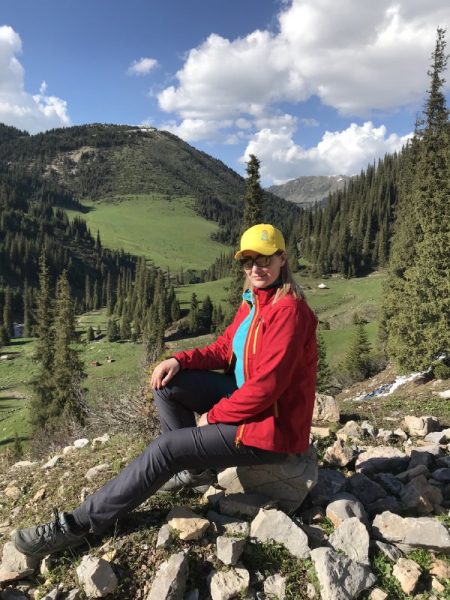