The Сentral Tien Shan - the largest mountain knot of the country, is located in the southeast, on a joint of borders of three countries - Kazakhstan, Kyrgyzstan and China. In riverheads Bayankol settles down the Meridional ridge in which several remarkable tops, such as Marble wall, Bayankol, Kazakhstan are allocated. In the next crest the legendary peak of Khan Tengri settled down. In the neighbourhood with these giants there is also a peak Astana.

Our company suggests you to participate in this expedition and to visit the most interesting mountainous area. We not for nothing call this program an expedition. It includes also the 400th kilometer moving on jeeps, and cargo delivery to the base camp a caravan of horses, and 12km trekking to the foot of the mountain.

The peak Astana is the top, very beautiful, but rather simple for ascension, available to any person.

The first part of a way (~ 800 m) from the base camp passes across the bed of the river of Sara Goynou to language of a glacier of the Marble wall. The track goes practically without ascent. Then it is necessary to climb a steep stone talus slope (set 100m). Further on the picturesque, well-marked track, without steep slopes we will move to the small stream which is flowing down from peak Astana. The general time in way about 2 hours (depends on physical training of group). Here it is possible to arrange a small halt, to have a bite, fill up water supplies.

Further our way will pass on a large talus, along a stream. We will rise to so-called "balcony" - huge "shelf", a peculiar pedestal of peak Astana (a set about 300 - 350 meters, time in way 1.5-2 hours). Rise rather abrupt, especially before an exit to "balcony". Helmets will be necessary for us for safety further. On "balcony" we will a little take rest. We continue our ascension. On talus slopes we come to a crest (1.5 hour) and through 100 meters we reach peak top Astana. Descent on the way of rise.

We begin our program with a sightseeing tour around the city. You will get acquainted with history of emergence and development of the southern capital of Kazakhstan, you will see: The area of the Republic and the Monument of independence, Opera and ballet theater of Abay, the Square of Astana, the Park of 28 guardsmen Panfilov’s men heroes of WW2, the Square of Abay and the Palace of the Republic, the Central state museum of the Republic of Kazakhstan, the Residence of the President. Lunch in cafe. On the twisting mountain road you rise by Mount Kok-Tobe of 1100 m, to the television tower, highest in the world (if to consider from sea level), which is visible from all parts of the city. Having gone down, to the city, we are expected by a dinner in national cafe. Transfer in hotel.

Today the early breakfast and to departure in the gorge Bayankol is necessary to us. Our way lies along the Foothills of Zailiysky (Trans-Ili) Alatau and Kungei Alatau mountain ridges and is very picturesque in dawn paints. On the way we will cross two small Ridges Boguty and Sogety and as a result we will get to the Kegen-Tekes valley by the beginning of the gorge Bayankol. Here it is necessary to undergo testing on the frontier post and then we will continue our way to the natural boundary Keskentas. Here we will be able to see in all beauty a highlight of Tien Shan – peak Khan Tengri and other tops. Installation of the camp. Dinner. Night in tents.

Day 3/01 August. Driving Keskentas –Gold mine Zharkulak (15 km) – trekking to the base camp of the Marble wall (12 km). Night in tents of the base camp.

After a breakfast we should pass by cars about 10 more km to the gold Zharkulak mine. Then a trekking part of our route begins. 12 km transition to the base camp are necessary to us. Throughout all way we will be accompanied by unforgettable types. Arrival in the base camp. Placement. We recommend to carry out small acclimatization walk to a glacier of the Marble wall. You don’t even represent, the nature surrounding the base camp is how fine. The green grass and streams, diversity of stony taluses and all this magnificence crown snow-white tops.

Day 4/02 August. Acclimatization trekking. Night in tents of the base camp.

Having quietly had breakfast and having taken with itself having a snack we will go to acclimatization towards the well-known Chinese pass (4000m). In immemorial times there passed very brisk caravan track here. On which, from Kazakhstan to China carried salt, and back various goods. On our way places of ancient parking will meet. We will approach the bottom of peak the Marble wall, the most northern six-chiliarch of Tien Shan. By a lunch or a bit later we will return to the base camp. Rest. Preparation for ascension.

Today an early exit is necessary to us. In general ascension on peak Astana (in the past peak the Outlook) doesn’t present technical difficulties. But anyway it is height over 4000 meters and we should overcome her influence. We will ascent by stone slopes that demands a certain skill. The unforgettable panorama of Tien Shan – Heavenly mountains will be a prize for everything, here you will understand an essence of their name. Return on the way of rise. Dinner in the camp.

Day 7/05 August. Trekking to the Zharkulak mine. Driving to the Saty village, placement in the guest house.

After a breakfast we come back to the mine, here we are waited by cars. Further moving (230 km) to the Saty village which to be in the territory of the Kolsay lakes national park, in a frame of several amazing mountain lakes is necessary to us. We accommodate in the guest house. We will be waited by a dinner. Also here it is possible to order a shower.

Day 8/06 August. Driving to the mountain lake Kaindy. Return to the village Saty. After a lunch moving to the lake Kolsay.

The first lake which we will visit the lake of Kaindy. The lake is known that it was formed at the beginning of the XX century, as a result of a catastrophic earthquake and that in the lake is cost by trunks of the fir-trees flooded in those days. Return to the guest house, lunch. Driving to the lake Kolsay. The lake was located at the height of 1818 m, has the extent of 1450 meters, width in a wide part of 400 meters, depth to 80 m. It was formed as a result of manifestation of seismic activity. The slopes surrounding the lake create a peculiar crown from the Tien-Shan relic fir-trees growing only in this region of our planet. The iridescent trout lives in the lake. Lake at all times year and at different times days in own way beautifully. Especially it finely in the fall when against the background of evergreen fir-trees deciduous plants blossom all colors of the rainbow. Return to the guest house. Dinner.

Day 9/07 August. Driving to the Sharyn canyon. Walk on a canyon. Return to Almaty. Placement in hotel.

After breakfast we leave to the Sharyn national park. We will visit the well-known canyon “The valley of locks” located in the territory of the Sharyn national park. It is the whole ensemble of palaces, towers and minarets formed of Pliocene deposits with irregular shapes of aeration in the form of eaves, columns, niches. The gorge has reached present shape approximately about half a million years ago. The canyon has the extent about 2.5 kilometers and depth to 150 meters in the place of an exit in the main canyon. Then we are waited by return to Almaty. Placement in hotel.

Transfer to Almaty airport. End of our service. 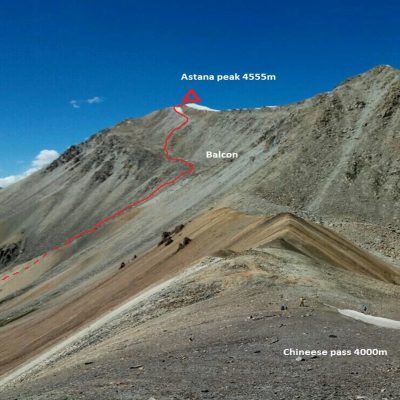